In the past few years, Google released many algorithmic changes. EMD Update is one. Other are like Panda, Penguin which have re-defined SEO strategy.

In its quest for quality it has released a minor weather update in late September.

This change is going to penalize the low-quality exact match domains which is nothing but EMD in short.

The major effect of this update will be on micro niche blogs which are having their domain name URLs matching keywords without enough content.

Some perfect examples of this penalty are sites like “windows8releasedate.com”,”askgoogle.com”,”topblogsites.com” which have the exact match keywords and have no/less related content.

Though these websites are made-up examples for demonstration purpose, they can be a target for EMD if they don’t qualify for high-quality content. 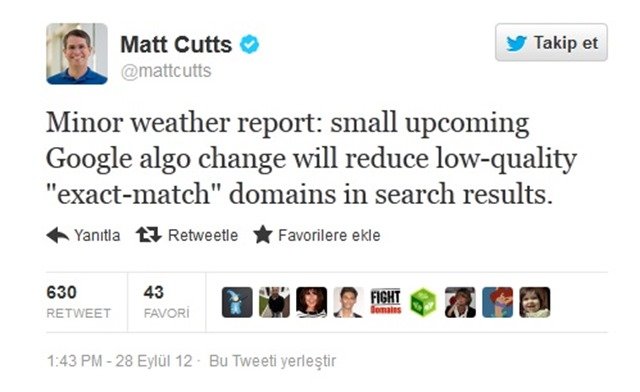 As of 9/29, “SeoMoz.org” reports that sites like “www.charterschools.org”,”www.purses.org” lost some rankings to this update.

Though the exact reason cannot be attributed to this alteration, it is observed they lost traffic on this day.

Earlier, these domains used to rank higher in the search engines.

Probably the loss in ranking can be ascribed to low-quality content considering the exact match keyword present in the URL.

However, after the EMD algorithm update, websites like these have been penalized and dropped down in the Google search index.

How to Recover the EMD (Exact Match Domain) Penalty ?

According to this news on “webpronews.com”, the noted SEO specialist Danny Sullivan says that the advice for EMD recovery is very much like that for Panda recovery.

“After you’ve removed the poor quality content, it’s waiting time. You’ll only see a change the next time the EMD filter is run,” he says. “When will that be? Google’s not saying, but based on the history of Panda, it’s likely to be within the next three months, and eventually it might move to a monthly basis.”

The  confusion with this update is that Google launched a new Panda update to roll out alongside the EMD update.

So webmasters and blog owners have to deal with both the updates at the same time, researching which update they are being affected by.

But like a god-sent-armor the cure for both the updates is same. Quality.

According to Matt Cutts, the Google Engineer, this EMD update will affect 0.6% of English-US traffic.

But the key point is that he didn’t mention how this change will affect other demographic regions.

But from “techulator.com” words, many bloggers are affected by this change.

He suggests the following changes to recover from the EMD affect.

So if you are affected, try to check your content.

Are you providing the latest topics on the niche you are covering on your website?

But if you have lost traffic on these sites, then try to merge all these sites into an authority site.

The over-kill can be a disaster like irrelevant link building, abuse of keywords, trying to take advantage of domain name etc.

So such over-optimization techniques when used less may improve your ranking.

The following guidelines are an SEO expert view on how to recover from Google EMD update. 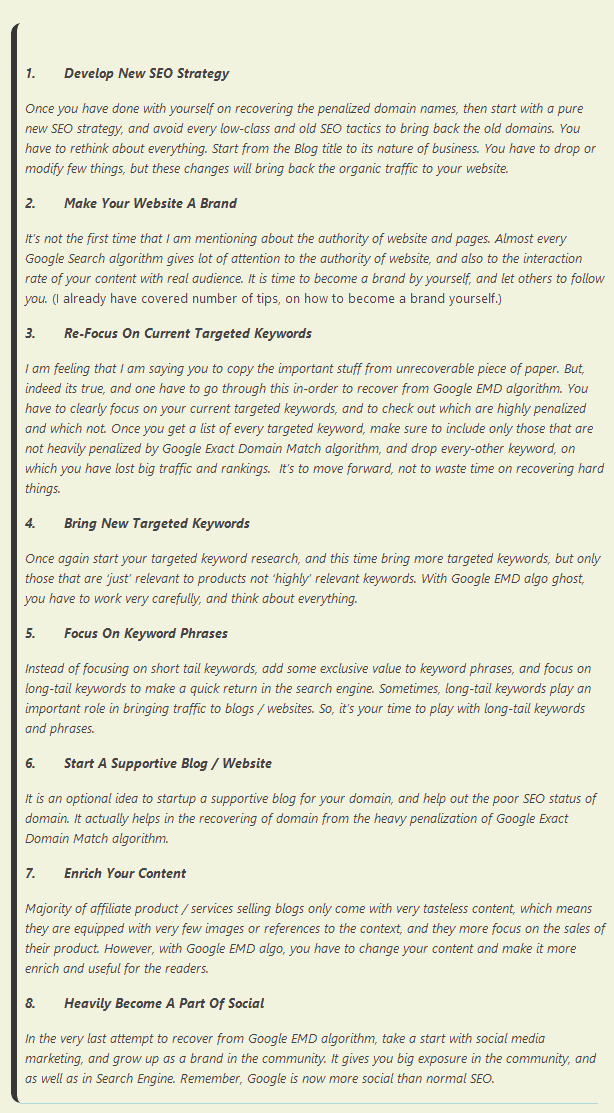 The other day I was suggested that I may be a target of EMD in Google Product forums.

The first thing I observed on my site was that I was heavily targeting on “Windows 8” articles which may come under over-optimization.

If you are also doing the same, I’d suggest a small change.

Try to write articles which are on the other side of your niche. For example, if your niche is “Tech” then try to compose objects on “Science”.

Another life-saving tip (if everything fails) to survive the EMD update is to switch to a new domain and do a 301 redirect to the new site.

So all the above tips can efficiently help you survive the EMD affect and bounce back your lost traffic.

The things which really help after an EMD are removing low-quality content and bringing in fresh content.

Let me know in the comments which parameter helped you discover the strategy to overcome EMD and put you on the same scale with other blogs.